The Innkeepers Frank & Monica Hopton, along with our talented and dedicated staff, hope to make your stay at Christopher Dodge House Bed & Breakfast as comfortable and enjoyable as possible. We cherish the honor of keeping this historic house in a well-maintained condition and are thrilled to provide B&B accommodations for guests from all over the country and the world.

Christopher G. Dodge House 1858: Built on a knoll, one story above street level, this imposing 3-story Italianate house has a 3-bay facade, a bracketed cornice, and wide eaves. The center entrance, flanked by bay windows on the first floor, is reached by twin stone staircases with fine, wrought-iron balustrades. The carriage house, now heavily altered, still stands at 95 Holden Street. Dodge, the owner of a dye-works, bought the land in 1853 from the Holden Estate and moved his family into their new home upon its completion five years later. The house remained in the family until the last years of the 19th century, but by 1901 it had been converted to a rooming house.

1853  – Christopher G. Dodge, a dyer working out of 156 Westminster Street and
living at 8 Worcester Street, buys property on Smith Hill from Thomas R.
Holden for $1,800; the property is described in the deed as “Two certain Lots
of Land both situated on Smith Hill in the Northerly part of said City of
Providence, & are laid-out & described as lots Numbers (35) … & (36) …, on
the Plat of the Holden Estate, surveyed & platted Nov. 1850 by Cushing &
Farnum & recorded in the Land Records of said City of Providence in Book of
Plats No. 4 page 3. Said Lot measures One Hundred & one feet & four & a
half inches on Holden Street, Thirty five feet & a half inch on Lot No. 34 on
said Plat and sixty four feet on Elizabeth Street now West Park Street. Said
Lot No. 36 measures Fifty feet on Elizabeth Street & holding that width
extends back from said Elizabeth Street, about Ninety seven feet to Lots 33 &
34 on said Plat” (Deed Book 132.481).

1854 – Tax records show no building standing on the property purchased by Dodge
the previous year (Tax Ledger A1.254).

1859 – City of Providence directory lists Dodge at this address.

1875 – Christopher G. Dodge quitclaims all rights and interests to the property favor
of Sarah A. Dodge (Deed Book 251.5).

1886 – Herbert E. Dodge buys the property at a public auction from Henry G. Tucker,
appointed as attorney for Christopher and Charlotte Dodge, after the Dodges
defaulted on mortgage
payments to the Citizens’ Bank (Deed Book 340.165). 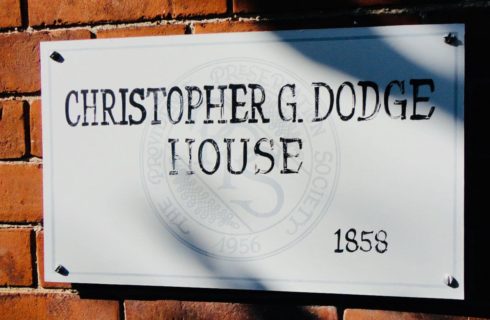 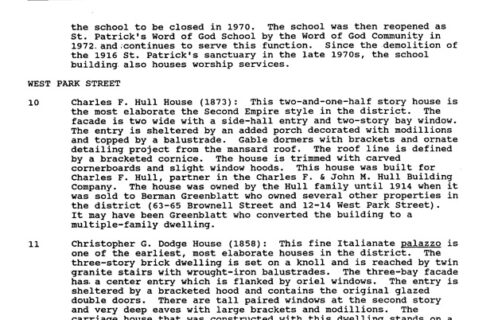 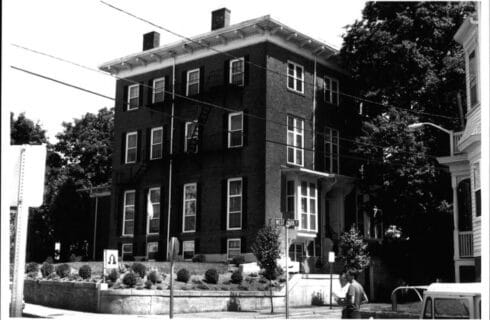